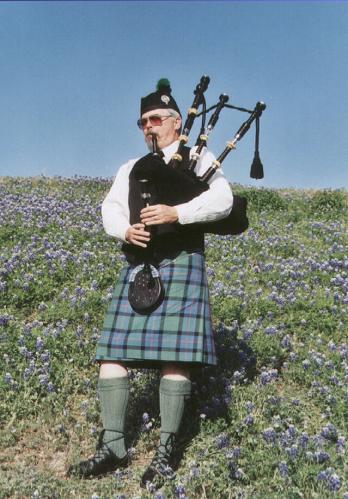 Amazing Grace from the movie “Rebel Private”, piped by Piperwill.

While most cultures have some version of a wind blown instrument using a bag reservoir for air, the modern popular conception of the bagpipe is derived from Scotland and more particularly from the MacCrimmons of Skye, an island off the West Coast of Scotland.  This legendary family, hereditary pipers to the Clan MacLeod of Dunvegan (1500-1800 a.d.) were the first pipers to fully codify and advance the art of piobaireachd, or classical Scottish Highland Bagpipe.  From there, following its initial illegality and declared pejorative as an instrument of war, by the conquering English, it was incorporated into the military system of Britain from whence it was spread around the world during the age popularly known as colonialism.  During this period the development of many other types of military and dance type bagpipe music evolved, including slow marches, quick marches, strathspeys, reels, jigs and hornpipes.

Ironically in more recent times, and with the help of popular singing artist Judy Collins singing what became a number 1 smash recording of  Amazing Grace in the 1970s with a full pipe band backing her up, it has become an instrument with which to glorify and worship God.  Dr. Keith McDonald of Canada has published many popular hymns in bagpipe format in five volumes, and armed with that, I have been very busy for the last 15 years, piping for Kirkings (clerical blessings of the family tartans), church services, weddings and funerals.